Digital vs. analogue at Habitat III meeting on civic engagement 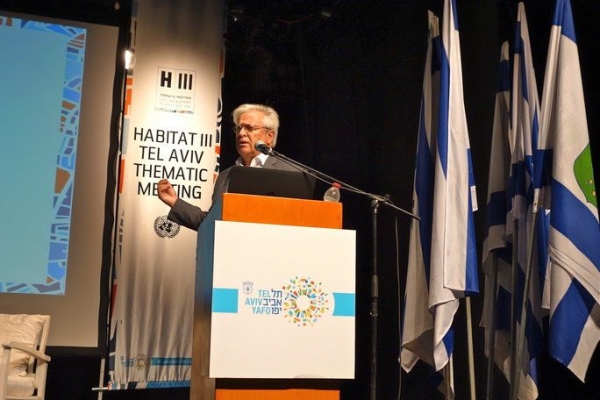 Habitat III Secretary-General Joan Clos addresses the Tel Aviv thematic meeting on civic engagement. “Civic engagement is about the roots of democracy,” he said. “It’s about the personal rights of humans to have a say in their everyday life and the form of urbanization.” (Greg Scruggs)

What is the best way for residents to engage with their city hall, in old-fashioned meetings or via new-fangled technology? In the Israeli city that considers itself the capital of a “start-up nation”, digital tools are increasingly popular to connect citizens and city services. But during social protests in 2011, community leaders organized a massive, 10,000-strong in-person roundtable event in a public square outside of the Tel Aviv Museum of Art.

This debate between tradition and the cutting-edge formed the grist of this week’s Habitat III thematic meeting on civic engagement. The meeting was the first of a series of such encounters that will flesh out the meat of the New Urban Agenda, the 20-year urbanization strategy that will come out of next year’s U. N. cities conference.

“Civic engagement is about the roots of democracy,” said Joan Clos, the secretary-general of Habitat III, which will take place in October 2016 in Quito. “It’s about the personal rights of humans to have a say in their everyday life and the form of urbanization.”

Clos spoke alongside the mayors of Amsterdam, Freiburg and Tel Aviv, as well as the deputy mayor of Paris and others, as part of the sixth annual Cities Summit, a daylong symposium during Tel Aviv’s annual tech bash, the DLD Innovation Festival. The Habitat III thematic meeting was in turn a subset of the Cities Summit.

For host Tel Aviv, the event was an opportunity to showcase its accolades. The city won the World Smart Cities Award during the Smart City World Expo Congress in 2014 chiefly on the strength of Digi-Tel, an e-government app and smart card for Tel Avivians. “The Smart City committee told us we won not because of how smart we are, but how we do engagement,” said Zohar Sharon, Tel Aviv-Yafo’s chief knowledge officer.

“Tel Aviv is the start-up city of the start-up nation, and it was clear to us that civic engagement needed to be in a digital format,” said Mira Marcus, international spokesperson for the City of Tel Aviv-Yafo. “We listen to every resident about what their needs are and how we can address them — no longer by town-hall meetings but rather by giving them a digital option how and when to be engaged.”

The term “start-up nation” was coined by authors from the Council on Foreign Relations, a U. S. think tank, in 2009. Their book of the same name analyzes how young Israel, with few natural resources, a small population and huge defence expenditures, has achieved such rapid economic growth, especially in the areas of high-tech services and biotechnologies. Tel Aviv, the country’s largest city and financial capital, has the highest density of tech start-ups in the world.

“Tel Aviv is the start-up city of the start-up nation, and it was clear to us that civic engagement needed to be in a digital format.”

As a result, the buzzwords of the global tech community — disruption, innovation, reinvention — were very much in the air at an event whose slogan was “cracking the innovation code”. Hila Oren, chief executive of Tel Aviv Global, the municipality’s international-relations arm, described the summit, founded in 2009 to commemorate the city’s centennial, as “a vision to create a platform for brilliant urban minds to be inspired by Tel Aviv, the nonstop city”.

Although Oren was quick to state that city was “proud to host the first Habitat III thematic meeting,” at times the focus on that event seemed like an afterthought to the start-up and business ambitions of the Cities Summit and the broader DLD Innovation Festival.

This was especially so with a keynote speaker like David Shing, AOL’s much-maligned “digital prophet”. His claim that “cities are just like brands,” followed by a rapid-fire exploration of trends in digital advertising, smartphone apps and wearable tech devices, did not contribute to a meaningful discussion of urban innovation or city-to-city learning, much less public participation and civic engagement.

Tel Aviv-Yafo Mayor Ron Huldai was more on the mark, if occasionally off-colour. He provided a vision of a city ruthlessly committed to learning from others and sharing its successes. Tel Aviv adopted a bike-sharing programme from Paris, he said, and co-working spaces from a New York City model.

“Urban innovation is part of the city’s DNA,” he said. “Only people with Israeli chutzpah can dream of a city with no water. Only very creative people can envision a financial and cultural centre in the middle of nowhere. And they succeeded.”