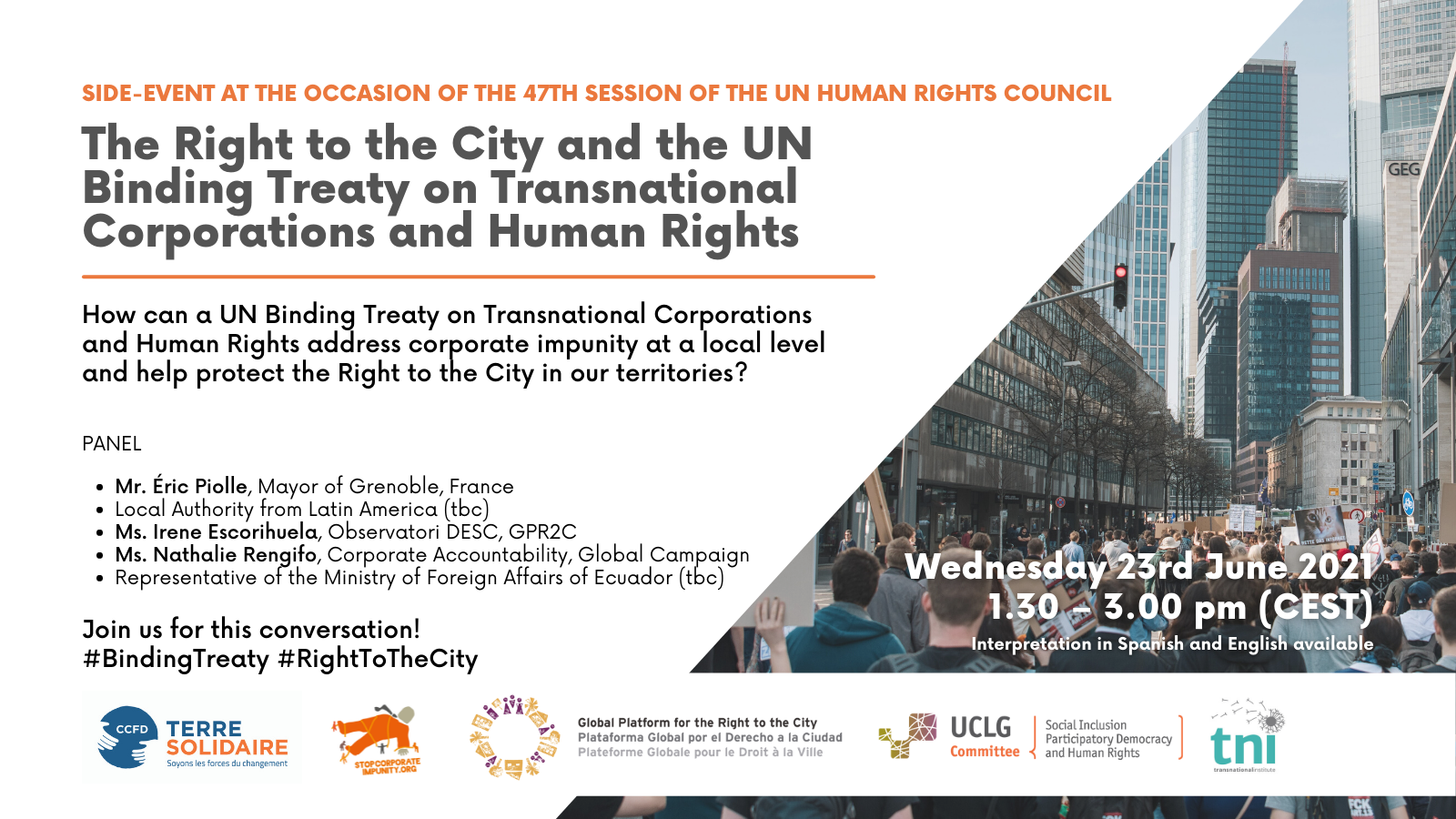 On the occasion of the 47th session of the UN Human Rights Council, CCFD-Terre Solidaire, the Global Campaign to Reclaim People’s Sovereignty to Dismantle Corporate Power and Stop Impunity, the Global Platform for the Right to the City, and the UCLG Committee on Human Rights, Social Inclusion and Participatory Democracy, are very pleased to invite you to the side event to highlight the possible contributions that an UN Binding Treaty on Transnational Corporations and Human Rights could have for protecting the Right to the City and Human Rights at a local level.

From the financialization of housing to the pollution of the urban environment, the impacts of the gig economy or the deprivation of the right to water, social movements and local authorities are increasingly confronted with human rights violations arising from corporate power. The event will bring together representatives of local authorities and community organizations from the Global South and North in order to highlight the impacts of transnational corporations at a local level and the possibilities presented by approving an UN Binding Treaty from a Right to the City perspective.

The event will take place from 13:30h to 15h CET and will count with participation of:

There will be translation to English, Spanish and French. You can sign-up for the event here.

This is the link to register to the Side Event: https://us02web.zoom.us/webinar/register/WN_35JudnryQIijaYU7o9oWcg

About the Binding treaty
In 2014, the United Nations Human Rights Council established an intergovernmental working group to elaborate a Binding Treaty to regulate the activities of transnational corporations and other business enterprises with respect to human rights. Every year since then, States are invited to the United Nations to participate in a new round of negotiations on the Treaty. The challenge is the adoption of a legally Binding Treaty to end corporate impunity and regulate corporate activities against environmental destruction, human rights abuses and violations. A UN Treaty would enable States to universally agree on the elements regulating the conduct of transnational corporations in international human rights law, and to lay the ground for an effective access to justice.

At the same time, cities and communities are joining forces through networks and common initiatives, increasing local democratic spaces and building concrete alternatives to the current economic and urban development models that reinforce exclusion and inequalities. In 2020, the “Call by Local authorities to support the UN Binding Treaty” was released, exposing their interest in an ambitious Treaty. The reflection on the UN Binding Treaty can support these initiatives to flourish and to advance towards a Right to the City paradigm that understands cities as common goods that belong to all inhabitants, and in which all can produce and enjoy the services and opportunities they have to offer.