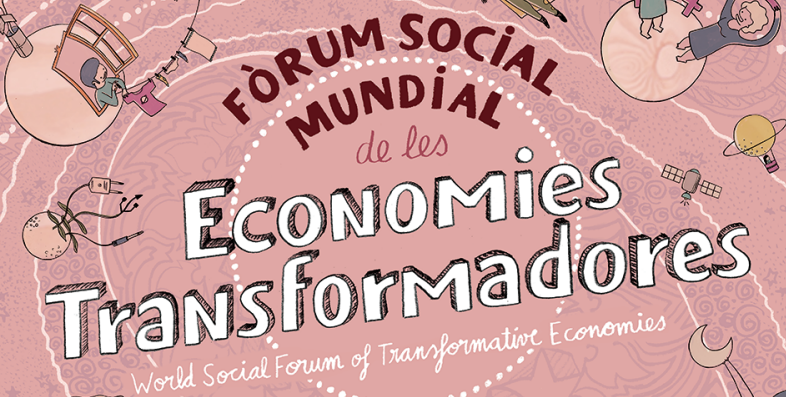 Due to the crisis triggered by the Covid-19 pandemic, the World Social Forum of Transformative Economies (WSFTE) cannot be held in Barcelona from June 25 to 28. The organization is working on how to continue with this process in the best possible way in order to build responses based on solidarity and working together. Check back at this page for more information in the future.

The World Social Forum of Transformative Economies is the process of convergence of different local and international movements from the alternative economy. The main objective of this process is to bring together social movements and projects which share the will to put people and the environment at the centre of the economy, to put an end to an economy based on extraction, growth, competition and the market, and to struggle towards collaborative, resilient societies which develop and reinforce strategic alliances and actions through working together.

This campaign seeks to deliver public visibility and recognition of transformative economy projects, as well as providing an alternative narrative to challenge hegemonic capitalist discourse, uniting forces among existing practices and processes of convergence that are already underway, in order to build together an inclusive global agenda which asserts that another world already exists! WSFTE 2020 aims to be the focal point for the diversity of initiatives, peoples, movements, networks, orientations, visions and aspirations for global and locally based change.

The event falls under the World Social Forum umbrella, evoking its spirit and Charter of principles, and will be driven by the values of inclusion, openness, transparency and respect for the autonomy of movements and civil society actors. It was set to take place from the 25th to the 28th of June in Barcelona, a city known by history of support to cooperativism and the solidarity economy.

The Global Plattform for the Right to the City  has been actively engaged in the collective construction of the WSFTE and will remain engaged in the process that follows.