The inhabitants in NY, facing the NUA for the Right to the City

The choice of inhabitants at the HLPF in New York: being g-local for the Right to the City facing the New Urban Agenda. 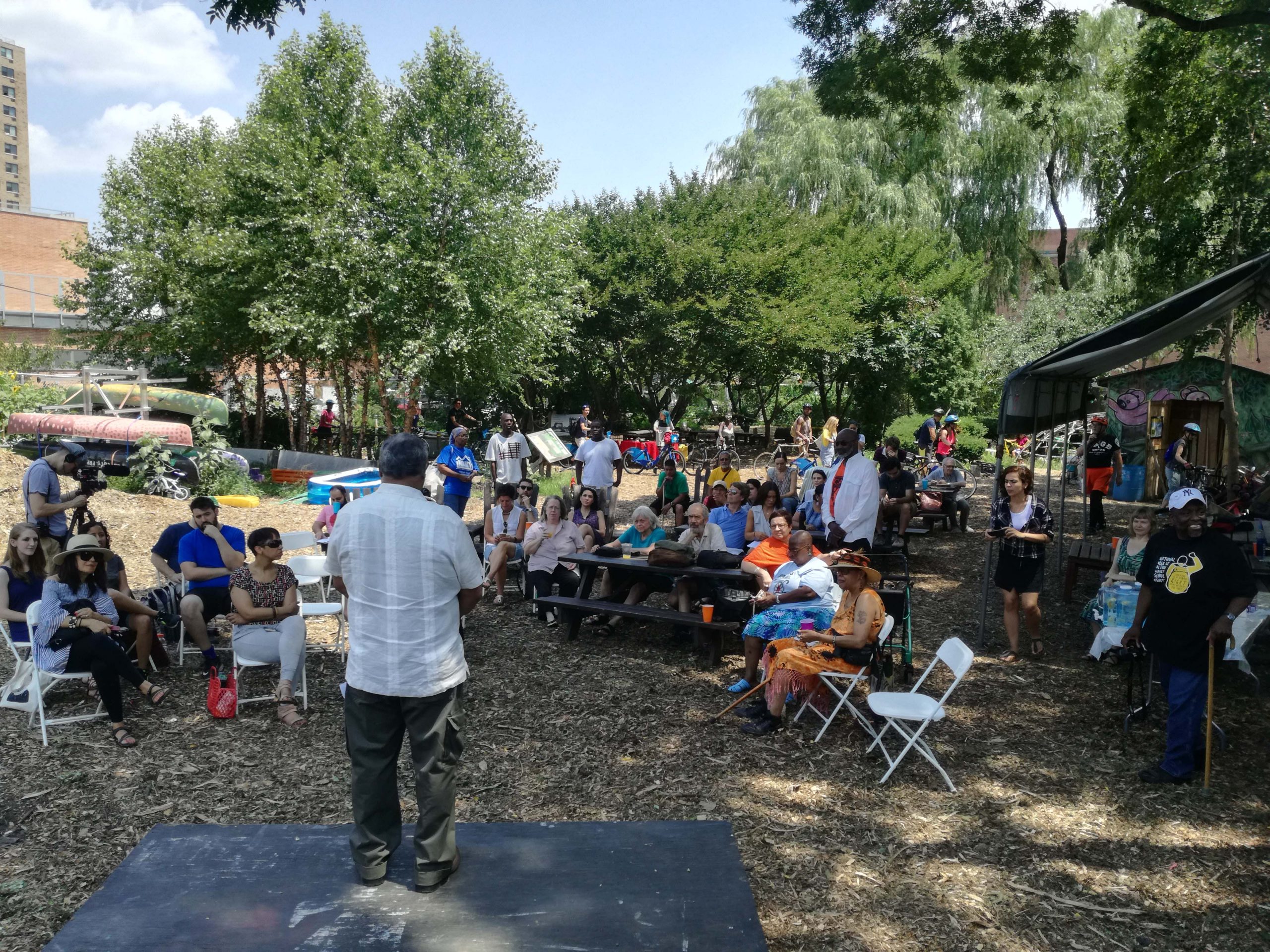 New York, July 2018. On the occasion of the High Level Political Forum (HLPF) on Sustainable Development Goals the IAI, HIC and other international networks and local organizations have participated in meetings organized within and outside of the United Nations building together with the Global Platform for the Right to the City.

This strategic choice has proved successful to reinforce the impact of the struggle for the right to housing and the city, avoiding locking themselves  in heavily conditioned rooms carried out, in particular, by the USA

To this intention special attention was brought to strengthen the connexions between local and global struggles of communities.

Therefore,  the popular meeting in the Bronx “Connecting International Struggles to Local Struggle”, was organised by IAI together with Picture the Homeless, Communities Action for Safe Apartments, Street Vendors Project and other local organizations. Over 100 participants discussed how to strengthen exchanges and local / international solidarity against evictions, real estate speculation, vulture funds, the depredation of common goods, for policies of public and cooperative housing, for the right to the city. Speakers included Leilani Farha, the UN Special rapporteur on adequate housing, Rob Robinson, US-Canada International Alliance of Inhabitants and Lorena Zárate, HIC president. On this occasion, Cesare Ottolini, the IAI global coordinator, delivered to Leilani Fahra three burning reports:

The Rapporteur is committed to taking action on each of the reports and to follow with particular attention the evictions caused by “development“ in Kibera, Nairobi, as well as the evictions cases and the activities of the International Tribunal of Evictions.

Next local / global occasions to implement this strategy will be the World Zero Eviction Days in October and the inhabitants’ activities on the occasion of international events such as Urban 20 (Buenos Aires, 29-30 October 2018), involving the local authorities of G20 countries, and Africities (Marrakesh, 20-24 November 2018), involving the african local authorities.

In this framework it was decided to organize an international meeting, alternative to U20, involving Habitar Argentina, local popular organizations, progressive local authorities and the UN Special Rapporteur. There will be panels, the follow up of the International Tribunal on Evictions and the support of ”Cities for Adequate Housing: Municipalist Declaration for the Right to Housing and the Right to the City”.  This Declaration, presented by Barcelona Mayor Ada Colau during the Special Session”

#MaketheShift: Cities for the Right to Adequate Housing”, counts on the support, among others,  of the mayors of Berlin, Madrid, Paris, and it is a good basis for the joint commitment of local authorities, inhabitants’ organizations and international networks, to implement policies based on the right to housing and to the city to face the neoliberal approach of the New Urban Agenda and of the G20 / U20.

This event will be the  right space for the second World Day for the Right to the City, launched last year with a focus on the struggle against evictions, on the occasion of the World Day of the City organized by the United Nations on 31 October.

The solidarity relationship between local popular organizations and international networks has been and will be strengthened to face the urban and housing crisis that underlies the neo-liberal implementation of the New Urban Agenda.  Being g-local consolidates the construction of an alternative urban social pact for the Right to the City, a space for dialogue and commitment to exit the housing and urban crisis with policies based on human rights and the environment, not on the paradigms of neoliberal development.