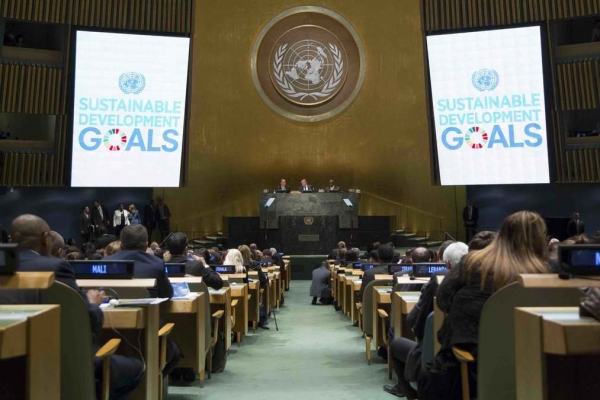 The General Assembly Hall during the United Nations summit for the adoption of the post-2015 development agenda, 27 September (Loey Felipe/ UN Photo)

While advocates who fought for the cities goal celebrated on the sidelines of the summit, a broader endorsement of urbanization as a key tool in sustainable development was notably absent in the speeches made by heads of state and business leaders, with a few exceptions. Traditional development concerns, such as poverty, hunger and education, as well as newer hot-button issues such as climate change and migration, overshadowed the call for sustainable urban development.

From Friday to Sunday, as heads of state and government delivered speech after speech endorsing the SDGs, cities and human settlements echoed only faintly in the halls of the U. N. General Assembly. Notable allies, such as Sweden — a co-chair of the Friends of Cities Group — and Ecuador — the host of next year’s U. N. conference on cities, Habitat III — made no mention of cities or urbanization. Indeed, no head of state or government cited Habitat III, although the Paris climate negotiations that will start in November, COP 21, were a frequent refrain.

Likewise, Pope Francis, whose recent efforts have highlighted the role of cities in combatting climate change, did not mention urban development in his address to the U. N., which opened the summit, although urban development themes did infuse other parts of his six-day visit to the U. S.

For Secretary-General Ban Ki-moon, the SDGs will be a lasting part of his legacy. “We have reached a defining moment in human history,” he said. “The new agenda is a promise by leaders to all people everywhere. An agenda for shared prosperity, peace and partnership.” Nonetheless, of specific issues for that agenda, he cited only climate action, poverty and gender equality.

European Union Commission First Vice-President Frans Timmermans was the only delegate to reflect the specific language of Goal 11. “[The SDGs are] about clean air, water and oceans,” he said, “more resilient cities, that are healthy, inclusive and safe.”

The most robust acknowledge of cities’ role in sustainable development came from Singapore’s environment minister, Vivian Balakrishnan. She titled her address, “Building Sustainable Cities of the Future through Pragmatism and Partnerships.”

Balakrishnan was quick to self-identify Singapore as a city-state and to argue that it has pursued sustainable development — which, in Singapore’s case, is de facto urban — since independence.

“Despite, and perhaps because of, our natural constraints, we had to achieve economic progress whilst preserving a good living environment,” she said. “Although we have one of the world’s highest population densities, we have maintained our greenery and biodiversity, and enhanced our citizens’ quality of life.”

Balakrishnan also referred to Singapore’s programmes to support robust data collection with 3D mapping of the city, high-tech urban sensors, and water and flood risk monitoring. In so doing, she implicitly acknowledged the cross-cutting nature of sustainable urban development in the context of the SDGs. That is to say, policies that support Goal 11 can also reinforce other goals, such as SDG 6 on water and sanitation.

Balakrishnan also addressed the non-partisan nature of results-driven urban development. “Singapore’s approach to policymaking and governance is pragmatic,” she said. “We focus on outcomes, not ideology.”

Other references to cities and human settlements came only in passing. Israeli Vice Prime Minister Silvan Shalom grounded his explanation of how the young country used technology to jumpstart its development path in the context of urban development.

“As a child, I lived with my family in Beersheva, a dry and arid town in the middle of the Negev desert,” he said. “Today, Beersheva, the capital of the Negev, is a thriving city, home to one of Israel’s leading universities and an emerging hub for sustainable technology.”

Prime Minister Tshering Tobgay proudly pointed to Bhutan’s success at achieving a “carbon negative” state, claiming that his country sucks more carbon out of the atmosphere than it produces. Among a litany of Bhutanese policies, he cited, “Exciting initiatives supporting carbon-neutral cities [that] have been introduced to address the challenges of increasing energy emissions from the transport sector.”

Tobgay spoke during one of the summit’s high-level “interactive dialogues”, this one bearing the theme “Protecting our planet and combating climate change.” Cities and human settlements were lumped under this category, although Bhutan was the only country to refer to them directly.

Brazilian President Dilma Rousseff mentioned “major progress with regard to housing programmes”, though without the detailed statistics she offered for Brazil’s progress in areas like renewable energy and combating deforestation.

Dunya Maumoon, foreign minister for the Maldives, said, “We may have reduced the rate of absolute poverty, yet people living in slum like conditions are plenty.” The Maldives are part of the Small Island Development States (SIDS), a group of low-lying countries whose main preoccupation is climate change and sea-level rise, which could effectively wipe their cities and human settlements off the map.

Finally, U. S. President Barack Obama closed the summit Sunday night with a statement on inequality that provided an oblique reference to the urban context. “When poor children are more likely to get sick and die than children in wealthier neighborhoods … that holds all of us back,” he said. His comments echoed Pope Francis’s recognition of inequality in cities during his Friday night mass in New York City.

If national governments were largely blind to the role of urbanization in promoting sustainable development, a coalition of advocates nevertheless raised high the urban banner, both inside the plenary halls and on the sidelines.

Chief among them was Joan Clos, executive director of UN-Habitat, who addressed the interactive dialogue on economic growth. He hammered home many of his usual talking points, arguing that cities are a source of, not an obstacle to, global development — generating economic opportunity and jobs that benefit local and national economic growth, provided they are well planned and managed with strong legal and financial frameworks.

Clos pointed ahead to Habitat III, a milestone also cited by Istanbul Mayor Kadir Topbaş, the president of United Cities and Local Governments (UCLG), the global network, who addressed the interactive dialogue on effective and accountable institutions.

“If we want to reinforce people’s confidence in public institutions, strengthening accountability, the institutional and financial capacities in local governments is critical,” Topbaş said. “As the closest sphere of governance to the citizens, local government’s responsibilities at the head of cities around the world intend to provide universal access to quality basic services — in particular to those which are most vulnerable, women, children, disabled and the poor.”

Topbaş also represented the Global Taskforce of Local and Regional Governments for Post-2015 Development Agenda Towards Habitat III, which issued a statement Sunday. The group emphasized the territorial dimension to development and asserted that the SDGs will not be achieved without local action. Their loudest call came on the financing front, however, as the signing of the SDGs has also led to the question of how to pay for the far-reaching new goals, given that cost estimates range into the trillions.

“The ‘city must be able to better finance the city’ through the mobilization of endogenous resources and improved access to financing,” the statement reads. “This includes the need for all residents, including local and international businesses paying their fair share of national and local taxes. This includes also access for local governments to new financing mechanisms, in partnership with private sector and local communities.”

Still, Clos, speaking at a separate event on the sidelines of the U. N. summit, was blunt about how the urbanization message must be shaped going forward. “Only if we are able to convince the governments, national and local, that urbanization is a tool for development will we catch the leaders’ interest to invest for development,” he said. “If we talk only about the problems of urbanization, we won’t catch the attention of the leadership.”