The Right to the City in New York 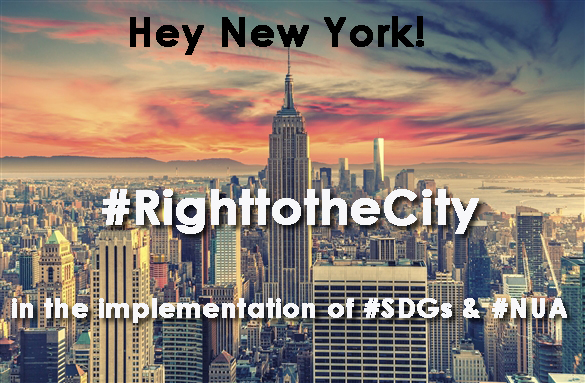 The Global Platform for the Right to the City (GPR2C) was in New York City, last July, taking advantage of the strong presence of civil society and local governments organizations from all over the world at the occasion of the High-Level Political Forum ( HLPF). The GPR2C, in line with its mission, continued its work committed to political action and social change through the promotion, defense and fulfillment of the Right to the City (R2C) at the global, regional and local levels, giving a particular voice to those people and communities affected by exclusion and marginalization. On this special occasion, the activists gathered in NYC unified their voices claiming that the Right to the City brings a new and necessary perspective to the implementation of the 2030 Agenda and the New Urban Agenda (NAU).  These agendas are already firmly based on human rights at all levels and this Right is a new territorial approach to the existing human rights.

In order to achieve this goal, the GPR2C followed different strategies:

i) Advocacy at the international level with the joint ”Right to the City Agenda” drafted by members of the advocacy working group. This agenda is a tool that seeks to contribute to the implementation of the SDGs and the NUA by linking the components of the Right to the City to existing international commitments and standards.

ii) The organization and participation in several events:

– At the HLPF: the training workshop “Leaving no one behind: sharing major groups and other stakeholders good practices for an inclusive implementation of the 2030 Agenda”, that focused on a human rights approach to the SDG planning, implementation, and monitoring processes to ensure that no one is left behind; the Local and Regional Governments Forum organized by UCLG which highlighted the key role both of these governments and the networks and platforms to the implementation of the 2030 Agenda, discussed the challenges and best practices of local implementation of the SDGs and called for the creation of new tools for governance and leadership, maximizing collaboration and resources. They also launched the municipalist declaration of Local Governments for the Right to Housing and the Right to the City “Cities for Adequate Housing”.

– At the New School: a training focused on the R2C components, implementation, monitoring and evaluation and this Right as a human right were discussed; and a panel on the role played by cities in the global agenda, particularly focused on the upcoming Urban20 Summit in Buenos Aires.

– the UN-Habitat meeting: an informal presentation of the vision and mission and the key areas of action as part of the change process and Strategic Plan 2020-2025, followed by a call for stakeholder participation in this Plan; among others.

Click GPR2C – NYC 2018-compressed for a full report of these events.

iii) The creation of an exhibition stand in order to gather people from all over the world and expand the Right to the City community of practices and knowledge. In this space, 19 initiatives, videos, an interactive table that explored the interlinkages between the eight components of the R2C and the SDGs and NUA, as well as interactive boxes that received 30 contributions from 25 different cities in 20 countries that connect their own experience to the R2C dimensions and other materials were displayed.

iv) A communication strategy carried out by the members and allies of the communication working group, in order to give visibility to the messages and actions of GPR2C members and allies in New York City. In particular, they launched a campaign on July 11, the same date as the assessment of SDG 11 at the HLPF, to demand the Right to the City as a necessary cornerstone for the implementation of the Agenda 2030 and the New Urban Agenda.

The strength of all the work carried out during in NYC resided in the diversity of members, allies and supporters of the Global Platform for the Right to the City. Both the more than 100 organizations from a variety of fields related to the Right to the City around the world that were present, as well as the organizations that participated in the preparations of those strategies and actively through the social media during the events, fought for the right to live in peace and dignity everywhere for everyone and showed  solidarity among the struggles, movements and strategies. Leaving no one behind is also leaving no place behind.