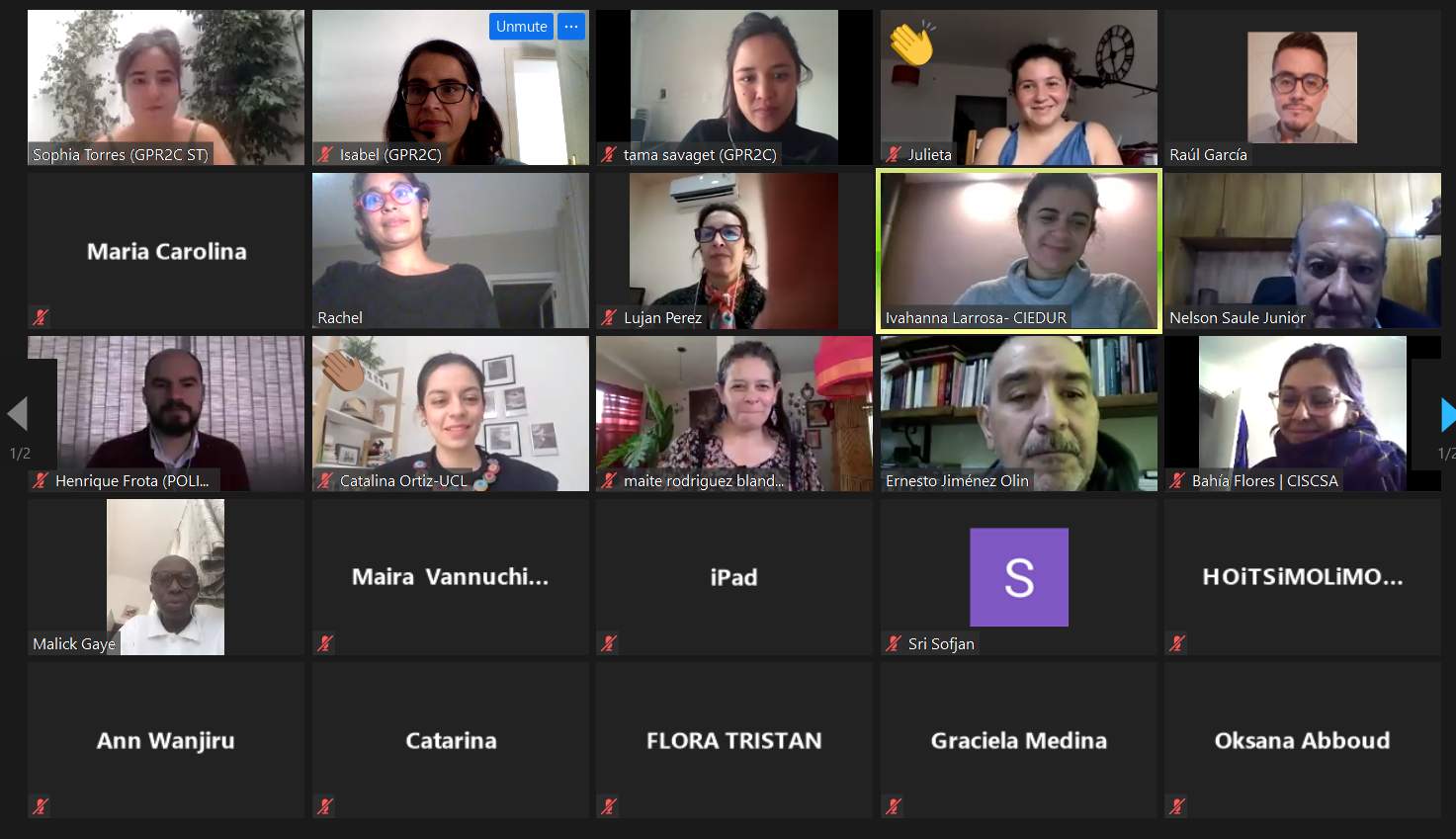 The Global Platform for the Right to the City (GPR2C) held an online side event at the High-Level Political Forum (HLPF) 2020 on July 16th, facilitated by Sophia Torres from the GPR2C support team.

GPR2C members and allies from local governments, international organizations and civil society networks presented possible paths provided by the Right to the City to face the Covid-19 crises through the lenses of global Agendas (such as the 2030 Agenda and the New Urban Agenda), focusing on the urge to move towards long-term transformations.

In total, we registered 65 participants from all over the world.

Speakers emphasized the emergency efforts that have been initiated and the need to implement measures that go beyond; the relevance of having an integrated vision that takes into account the Right to the City components and Global Agendas. Three thematics were discussed: Social protection mechanisms and securing livelihoods, particularly in the informal economy; Gender equality, violence against women, and the transition towards a care-based society; Racial justice and the Right to the City.

Below you will find the main ideas and messages discussed throughout the event:

The pandemic has forced all spheres of decision-making to take emergency measures to help those most in need. It is clear that while everyone can be affected by this virus, those in vulnerable situations are at greater risk and being disproportionately impacted. Moreover, the current crisis has exposed the fractures and failures of our economic growth model, especially concerning long-standing structural inequalities.

This has meant that public policies have had to adapt, to be put in place quickly, and to try to be as effective as possible to reach the people in vulnerable situations (homeless people, informal workers, people living in informal settlements and slums, or far from public services, women), as presented by Angela Mwai, Acting Chief of the Human Rights and Social Inclusion Unit at UN- Habitat. Examples from all over the world have shown that working in partnership with civil society has been crucial to designing and realizing these social policies. As presented by Xinia Navarro, Secretary of Social Integration of the city of Bogotá, where a new social and environmental deal is being implemented, taking advantage of the measures put in place during the pandemic.

Cities have been on the front line to tackle COVID19 and its impacts, as Amanda Flety from UCLG stressed. Participants noted that the cities that have committed to Right to the City components and Human Rights have dealt more efficiently with the crisis providing quick responses. Some areas in which these cities have been exemplary are: proposing inclusive actions for all inhabitants, including migrants and refugees; effective public policies to tackle gender violence; and strong public housing policies.

In the same way, these transformations cannot be dissociated to implementing Global Agendas (SDGs and NUA) to move towards substantial structural transformations. For international organizations, as UN-Habitat, the general approach is to “build back better”, said Roi Chiti, Chief Technical Advisor from UN-Habitat. They are committed to supporting local governments and communities, helping to mitigate the economic impact, and initiate recovery; providing data for mapping and supporting the implementation of social policies.

Finally, speakers have agreed throughout the event that it is essential to keep in mind that the objectives of the Global Agendas and the components of the Right to the City are interconnected. An integrated approach would facilitate moving towards long-term responses.

The pandemic has revealed the overall importance of the informal economy as the main source of income for millions of households around the world (the vast majority in many countries). Furthermore, informal workers are the most affected and vulnerable because they are the most easily exposed to the virus, have more risk to lose their incomes, and are the furthest away from health and basic public services.

One particular policy highlighted in the event was related to Basic Incomes. Many civil organizations have been historically advocating for such policy, with the COVID-19 crisis being a key moment for the implementation of such measures. The example of Brazil, explained by Maira Vannucchi from StreetNet International, is important to highlight as it shows that national governments can implement Basic Income policies directed to the most vulnerable populations. However, many lessons are still to be learnt regarding the implementation of such policies.

Gender equality, violence against women and the transition towards a care-based society

Maite Rodriguez Blandon from the Women and Habitat Network emphasized that this pandemic has particularly affected women, in terms of :

Grassroots women have worked together to collaborate with local and national governments to scale-up development initiatives. One of these initiatives is the Community Resilience Fund, implemented by the Huairou Commission, which supports women’s groups to deliver pro-poor disaster risk reduction, as presented by Violet Shivutse of the Huairou Commission.

Civil Society and local governments, as some of the initiatives implemented in Bogota, are moving forward to a care-based society.

Racial justice and Right to the City

Social and Racial inequity in the US “are issues that are not new, but that have been put increasingly into the spotlight during the COVID-19 crisis”, says Robert Robinson, from the International Alliance of Inhabitants.
People of color are disproportionately affected by social issues such as lack of proper health care, continued police brutality, homelessness, lack of adequate housing, and evictions. All of this has put members of racial and minority groups at an increased risk and vulnerability during the COVID-19 pandemic.

In this context, the killing of George Floyd, whose video was viewed around the world, aroused the indignation and anger of citizens, especially young people, who decided to take their rage to the streets.

Thanks to all the speakers :

See all the presentations here