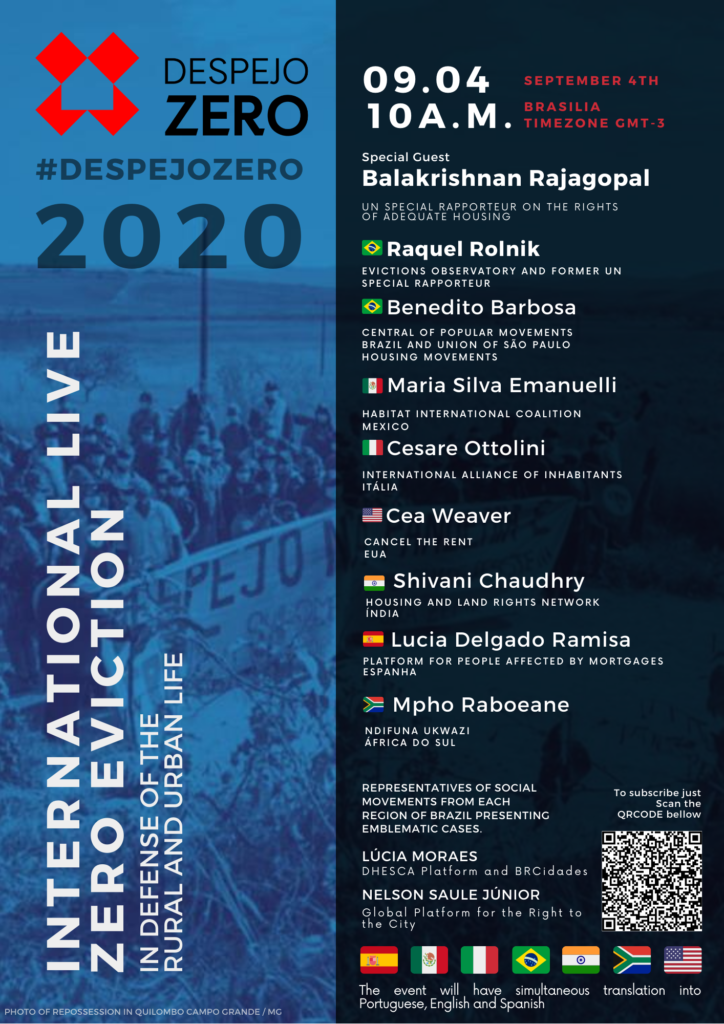 On September 4, institutions and social movements held an international online event against evictions and removals.
The event was broadcast live through Zoom, with Balakrishnan Rajagopal, the UN Special Rapporteur on the Right to Adequate Housing, and social movement leaders from Mexico, Italy, the USA, India, South Africa, Spain and an audience of over 600 participants.
The broadcast was simultaneously translated into English, Spanish and Portuguese.

The initiative is part of the Zero Eviction Campaign, created with the aim of putting pressure on the public authorities, with the support of the population, to put an end to evictions and removals, whether they are the result of private or public initiative, and which aim to displace families and urban or rural communities. The articulation also brings together hundreds of movements from the countryside and the city.

The event was divided into two blocks, the first of which included testimonies from movement leaders from various cities around the world. Were presenting this block :
– Maria Silvia Emanuelli, from Habitat International Coalition (HIC) in Mexico,
– Cesare Ottolini, from the International Alliance of Inhabitants (IAI) in Italy
– Cea Weaver, representing Cancel the Rent, from the United States
– Shivani Chaudhry, from the Housing and Land Rights Network in India
– Lucía Delgado Ramisa, from the Spanish Platform of People Affected by Mortgages (PAH), and
– Mpho Raboeane, from the Ndifuna Ukwazi organisation in South Africa

The second block was presented by Nelson Saule Júnior, coordinator of the Global Platform for the Right to the City and Lúcia Moraes, of the Brazilian Platform for Human Rights (DHESCA Brazil). Representatives of social movements from all regions of Brazil were also at the event, presenting pictures of removals in the country.

In addition, the event was attended by Benedito Barbosa, from the Central of Popular Movements, who handed over the report of denunciation prepared by the campaign organizations to the UN Rapporteur.
The report was based on information collected by the institutions themselves, between March 1 and August 31, through complaints, online forms and the database of the Observatory of Removals and Public Defenders.
In this report, more than 30 cases of evictions were identified in Brazil during the period analysed, reaching more than 6,373 families.
About 47% of the cases occurred in Amazonas, with 3000 evictions counted.
São Paulo also had a large number of affected families, representing 1681 evictions, 26% of the total cases.
In addition to these states, evictions were also found in Minas Gerais, Pernambuco, Sergipe, Roraima, Paraná, Santa Catarina, Maranhão, Rio Grande do Norte, Goiás, Rio de Janeiro and Rio Grande do Sul.

The discussion was moderated by Professor Raquel Rolnik, coordinator of LabCidade (USP) and former UN rapporteur.

The UN Special Rapporteur on the Right to Adequate Housing, Balakrishnan Rajagopal, was in charge of the presentation of the meeting and, as he concluded in his final speech, if on the one hand we are going through multiple intersectional crises, on the other hand, the struggles around the world are also interconnected and solidarity is the key to overcome the challenges we face as a society, especially those involving violations. the right to housing, land and the city.