Right to the City Agenda for the French local elections 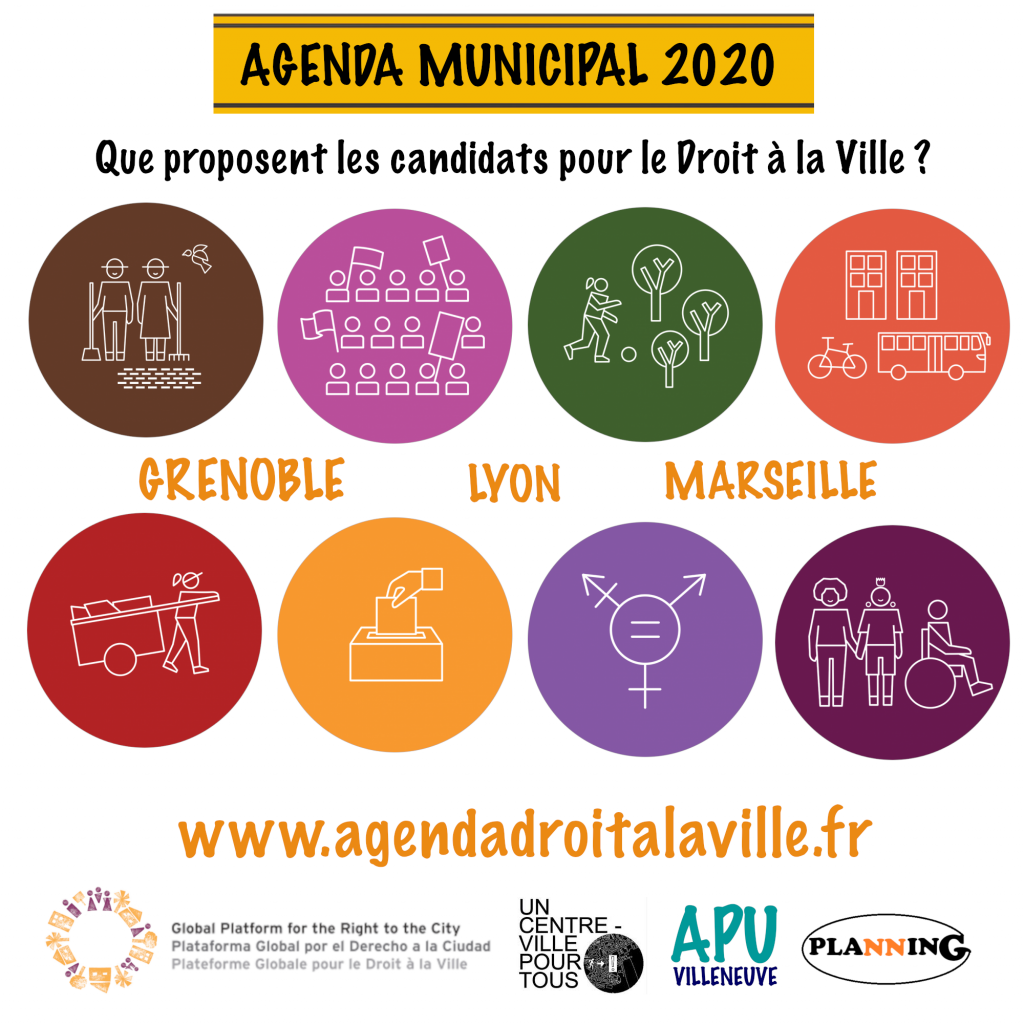 The local level is increasingly asserting itself as a key space for political participation and the collective construction of democratic life. This approach is based on the idea that proximity facilitates concrete action on local issues. The local level lends itself to more open and participatory political approaches, as opposed to the opacity, bureaucratisation and distance of the national and regional administrations. It is under this perspective that the “Agenda for the Right to the City” was created, an initiative of the Global Platform for the Right to the City and the Observatori DESC with the associations Planning (Grenoble), Un centre Ville pour Tous (Marseille) and activists from Lyon. The objective is to bring the Right to the City approach to the French municipal elections of 2020 from civil society’s point of view by ensuring the impact of the demands of social movements during the electoral campaign.

The French municipal elections took place on March 15th in the midst of the COVID-19 crisis, with a large abstention rate. It is obviously too early to analyse the results. However, two dynamics can be noted. Firstly, several left-wing and environmentalist coalitions have obtained very good results in several large cities (Toulouse, Strasbourg, Lyon, Grenoble…) with programmes in favour of the Right to the City. In particular, some candidates have committed to achieving the objective of 30% social housing by 2030. The second dynamic is that of the participatory lists: about twenty citizen lists were elected in the first round and about a hundred will be present in the second round. Located in villages and small towns, their victory would make it possible to strengthen links between rural and urban areas.

The second round, originally scheduled for March 22nd, was postponed to June 2020. In the meantime, the organizations participating in the Agenda for the Right to the City remain mobilized to face the serious consequences of this crisis for citizens and communities on the health, economic, social and political levels.

The Agenda for the Right to the City

Initially launched in 2019 on the occasion of the Spanish municipal elections, the Agenda for the Right to the City has brought together more than 600 measures for Barcelona and other cities in Catalonia. For the French chapter, more than 300 proposals were collected from civil society organisations in Grenoble, Marseille and Lyon. The aim was to give more voice to counter-powers, facilitate debates and collect proposals from local collectives in the three cities. The demands were organized according to the eight components of the Right to the City, covering different themes ranging from the right to housing and political participation for all, to urban mobility and climate justice.

The three cities that participated in the French chapter of the initiative share a common history of mobilization around the Right to the City, as well as a strong articulation of civil society. The three organizations that coordinated the initiative have contacted various associations and collectives mobilized for the Right to the City at the local level, and have thus collected diverse proposals that are representative of local struggles.

Local associations and collectives have been active in Marseille for a very long time. Their actions affect all sectors impacting social and fundamental rights. November 5, 2018 was an essential turning point in the convergence of these collectives around issues related to the Right to the City. This tragic date marks the collapse of 2 contiguous buildings in Rue d’Aubagne causing the death of 8 people. This tragedy was the last straw in a series of serious dysfunctions linked to the lack of access to housing, the lack of maintenance of public facilities (including schools), and the failure to take into account the expertise of the inhabitants in urban development projects. More generally, there is a lack of implementation of the Right to the City for all inhabitants, whatever their social background, administrative status or place of residence in Marseille.

This situation has given rise to demands made by many groups. Several of these demands, among some included in the Agenda for the Right to the City, were presented on February 13th by numerous local collectives on various subjects such as urban planning, right to housing, climate justice, public facilities and mobility.

In Grenoble, the Right to the City is rooted in a long and singular history that has shaped the political landscape of the city with a very dense fabric of social movements and associations. Despite a favourable political context, the metropolisation of Grenoble and the economic attractiveness of the area continue to generate the financialisation of the city and property speculation. Social movements continue to lead many struggles: Citizen Alliance campaigns, struggles against the demolition of social housing, actions in favour of the Right to Housing, struggles for public services, etc. Voices are also being heard calling that policies for ecological transition have to be accompanied by commitments in favour of the Right to the City. 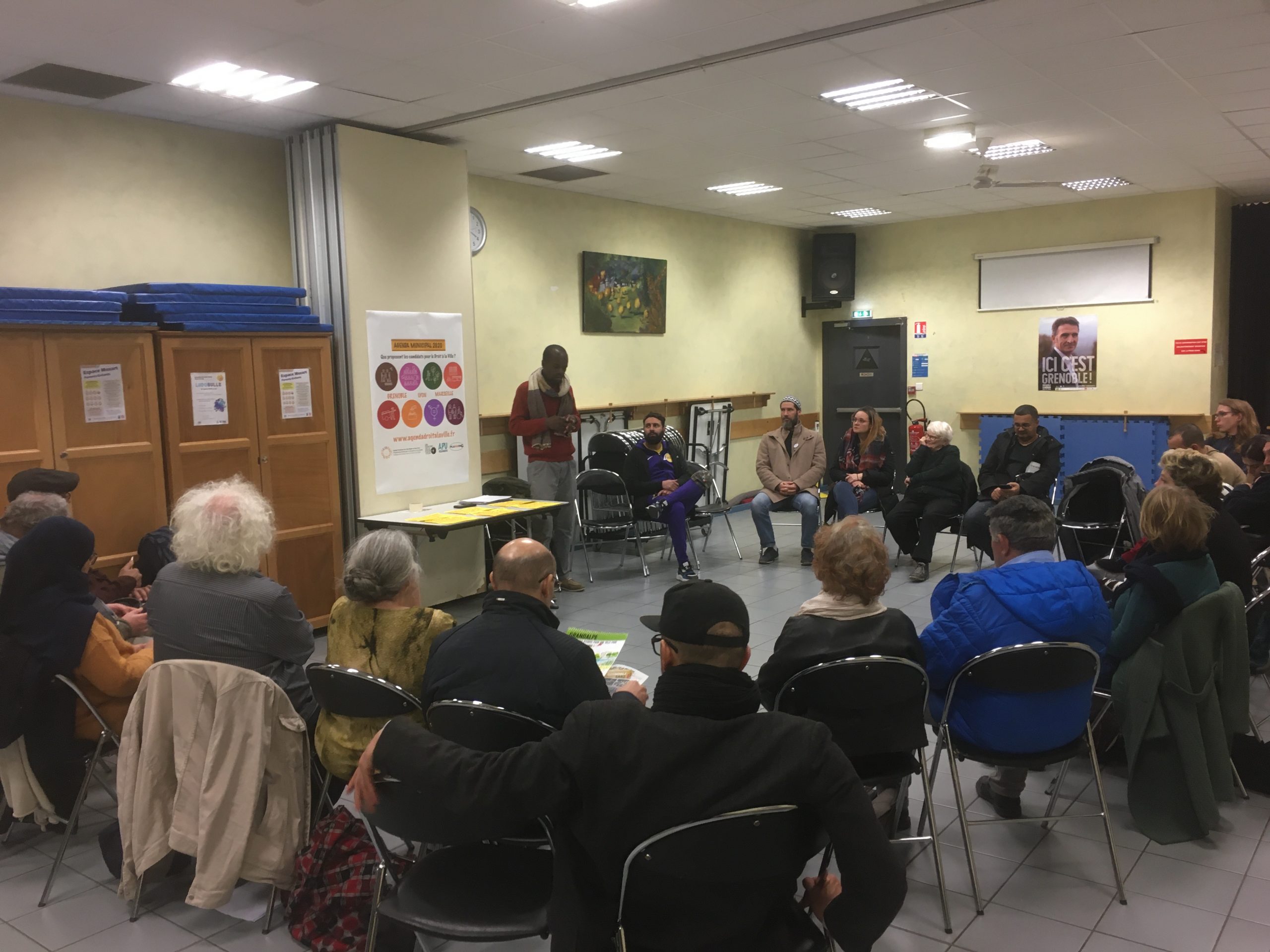 In Grenoble, the Agenda for the Right to the City has fostered the emergence of numerous Advocacy initiatives involving about 150 proposals. Among these initiatives, Le plaidoyer pour Villeneuve (The Advocacy for Villeneuve) of the Atelier Populaire d’Urbanisme (Popular Urban Planning Workshop) has gathered around forty proposals to continue the urban transformation of this emblematic district. Throughout the campaign, the Agenda for the Right to the City was presented to candidates and citizens’ assemblies. The initiative was discussed at the fourth Commons Assembly of Grenoble, which took place on 31 January 2020, with a particular interest on land policies. The proposals on stopping the demolition of social housing and the implementation of a referendum of citizen initiative (RIC) have been taken up by the citizen list “The Commune is Ours”.

The Agenda for the Right to the City was also presented on February 22nd in a debate between inhabitants and the mayor of Grenoble Éric Piolle, candidate for re-election with the Grenoble en Commun list. During his last campaign meeting on 11 March 2020, Eric Piolle publicly committed himself to one of the main proposals of the agenda: the objective of 30% social housing by 2030. Finally, the proposals were discussed during a public presentation of the guide on municipalism that brings together a dozen lists from the Grenoble region. All these initiatives have helped to strengthen the links between the actors of the Right to the City and to make the voice of Grenoble civil society heard during the municipal elections.

The Right to the City in the Lyon metropolis has a long history of fighting the hegemonic model of production of the city: investments centralized in the city centre, financialisation of land and housing, large urban projects imposed at the inhabitants, extreme centralism of decisions and repression of dissident voices. Social movements struggle and act at all costs to defend the rights and spaces they cherish, but hopes for radical political and institutional change have long since been exhausted. In this centralized metropolis, democratic openness must come from the grassroots and from organized counter-powers in civil society.

In Lyon, the Agenda for the Right to the City represents a unique tool for linking collectives, documenting inhabitants’ knowledge and mutual advocacy towards local political leaders, in town halls and in the metropolitan level (in 2020, Lyon is the only metropolis subject to direct universal suffrage elections organised at the same time as municipal elections). The Agenda marks the launch of a strategic coordination of local actors committed to the Right to the City. Several of these actors met on March 12 for a Citizens’ Assembly for the Right to the City where the demands of the Agenda were presented and debated with the aim of straghtening the convergence between local social movements.

Among the proposals collected from local collectives, 13 were chosen to conduct an evaluation of the programmes presented by the political parties in the three cities. These measures were selected because they are common (except for a few details) to the 3 French cities, respond to the diversity of collectives fighting for the Right to the City and incorporate its different themes. The evaluation, carried out by the organizations coordinating the Agenda, is based on the presence or absence of these 13 measures in the programmes. It allows to have a first idea on how each candidate dialogues with the Right to the City and considers (or not) the proposals of the mobilized civil society organizations.

A global movement with local responses

By articulating the experiences of French cities with those of other communities around the world, the Right to the City Agenda aims to go beyond electoral processes. By replicating this initiative, the organizations involved are helping to build a common repertoire of strategies and ideas to reinvent our cities, based on the Right to the City approach: global cooperation to change the local scale.

You can consult all the proposals for French and Spanish cities here.