Campaign #RighttotheCity during the HLPF 2018

The global campaign for advocating that the Right to the City has to be the cornerstone for the implementation of the 2030 Agenda and the New Urban Agenda was launched on July 11th 2018 – a strategic moment as it is the same date as the review of global progress toward SDG 11 on sustainable cities at the HLPF.

The campaign was based on three pieces: 1) the launching of the joint declaration the ”Right to the City Agenda”, a tool that seeks to contribute to the implementation of the SDGs and the NUA by linking the components of the Right to the City to existing international commitments and standards; 2) a tweetstorm with the hashtags #RightToTheCity and #HLPF2018, which achieved thousands of impressions and positioned the GPR2C as the third most influential Twitter account; 3) dissemination of local and global Right to the City implementation initiatives by GPR2C members and allies.

According to social media analytics, the hashtag #RightToTheCity was very popular on the conversation developed via twitter at the HLPF: 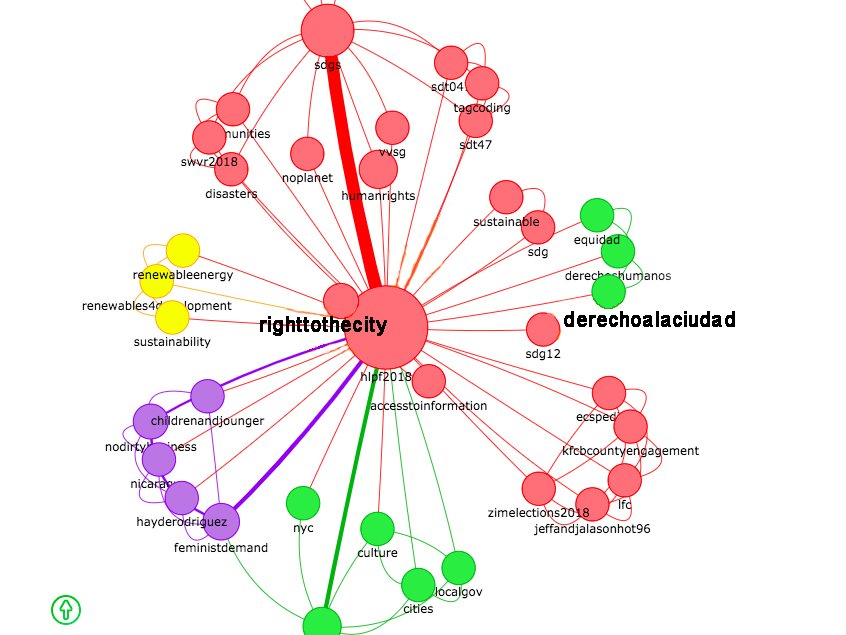 As a result, our messages and initiatives had great visibility during the HLPF conversations and the Right to the City movement is growing at a tremendous rate.  This has been made possible by the great collective work of members and allies.

Let us continue to unite our voices claiming that the Right to the City brings a new and necessary perspective for the Implementation of the 2030 Agenda and the New Urban Agenda. Civil society and local governments organizations have a say on how to live in peace in dignity in our cities and human settlements.