The “right to the city” is the right of all inhabitants, present and future, permanent and temporary to use, occupy and produce just, inclusive and sustainable cities, defined as a common good essential to a full and decent life. This concept has been built through decades, from base movements, and reaffirms the sense of city as commons, articulating all different dimensions of cities and urban life (public spaces, housing, services, etc.). On the other hand, the “cities for all” concept emerged only recently and relates foremost to the dimension of equality and of non-discrimination in cities.

The Zero Draft of the New Urban Agenda (both, the first and the revised version) included these concepts in the Quito Declaration, anchoring the vision in the “cities for all” concept, which in some countries would be understood as the Right to the City. Although their inclusion in the NUA is extremely important, this formulation leaves many questions open for debate. Therefore, our Urban Breakfast aims to bring together representatives from governments and various civil society stakeholder groups to discuss the meaning of both concepts and also to debate the best way to frame this issue in the New Urban Agenda.

By the Global Platform Right to the City is important this initiative to bring together representatives from governments and various civil society stakeholder groups to discuss the better way to include the Right to the City in the New Urban Agenda.

Attendees unable to join in person may participate via phone and/or WebEx:
Meeting number: 597 783 462 / WebEx: https://goo.gl/qzj7ba

Panel Discussion Questions
What is the difference between the Right to the City and the Cities for All concepts?
Do they have the same scope and entail the same obligations?
What is their legal basis? 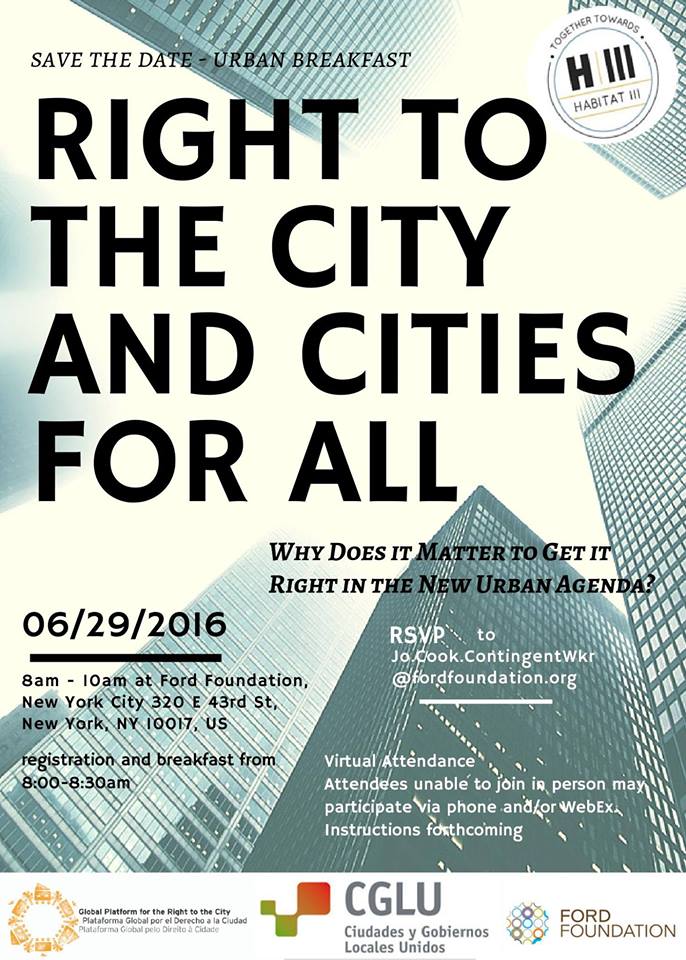