Minutes from the GPR2C Assemblies: Right to the City facing COVID-19 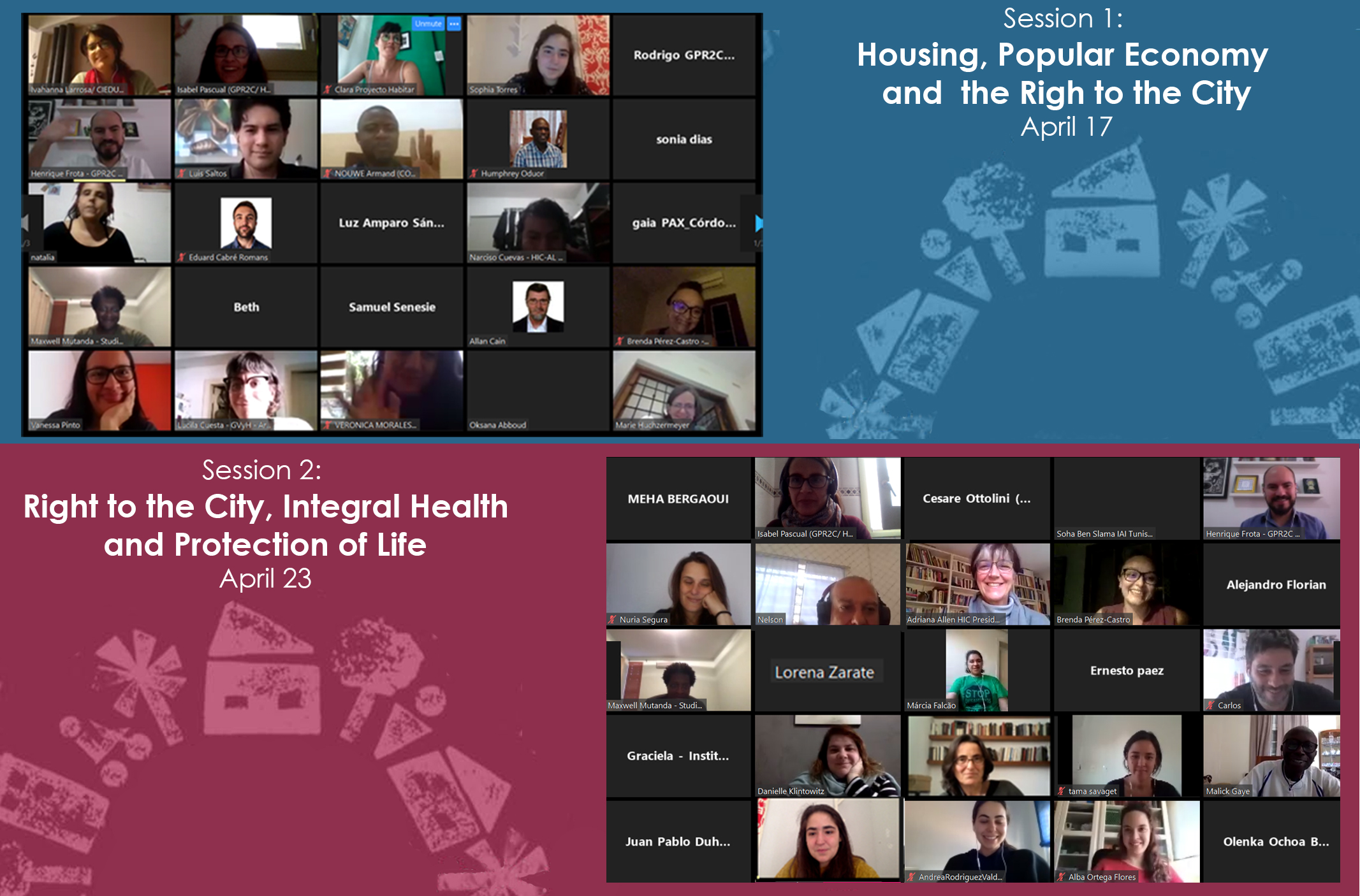 The Global Platform for the Right to the City (GPR2C) held a 2-part Assembly, focusing on the Right to the City in the face of the COVID-19 pandemic. The first session, held on Friday April 17, focused on adequate housing and popular economy, while the second, which focused on integral health and the protection of life, took place on Thursday April 23. In total, the Assemblies were attended by around 160 participants from social movements and organizations, local governments’ organizations, networks and academia from all regions of the world with the goal of sharing their ongoing initiatives to face the crisis and advance towards a common response based on social justice and human rights.

Participants’ interventions brought to light a great variety of perspectives, challenges and proposals regarding the right to adequate housing for the homeless and that of tenants, the increasing violence against women, the importance of gender equality and a society based on care, the integral attention to the inhabitants of precarious settlements, the social protection of workers in the popular economy (called informal, although it sustains more than half of the population in many places of the world) among others. Some of the key messages that emerged from the presentations and the debate are highlighted below.

Insights from a participatory exercise carried out during the second assembly

It is clear that the current crisis affects all spheres of individual and collective life. On the one hand, it makes visible and magnifies the social and economic inequalities and spatial segregation that already existed, resulting from neoliberal policies, structural adjustments, privatization and the reduction of the capacity to act of the State and of the public sphere more generally. On the other hand, it emphasizes the need to prioritize and focus on the possibilities of changing course. In this sense, the interventions raised the attention on two different times and logics at stake: short-term emergency, which requires many urgent and coordinated actions; and medium- and long-term transformations towards social justice and sustainability. These Assemblies allowed us to reflect on the connection between these two logics, to think about how our present actions contribute to the more profound changes we want to see.

The territory and its social function

The presentations pointed out different themes, actors, scales and regions, analysing the connections and challenges between them. On the one hand, the proximity dimension was highlighted, with a solidarity neighbourhood-based approach to health care, food, income, families and neighbourhoods; as well as the importance of working closely with local governments and grassroots organizations to respond to the most urgent needs from the ground. At the same time, the social function of city/property was highlighted, for example with  the use of hotels, housing and other empty facilities for homeless people or in need of isolation. The territorial and social function perspectives, central for the right to the city, have much to contribute to emergency responses and longer-term deep transformations.

More coordination and cooperation, under a human rights approach

The urgent need for more horizontal and democratic collaboration between actors and institutions (government, communities, civil society) was emphasized at different scales (neighbourhood, city, national, international) to address the pandemic and its health, social and economic consequences. In that regard, with the exception of the World Health Organization, it is a matter of concern that we have not seen such an active presence of other United Nations agencies so far. Participants noted the urgency of placing a human rights approach at the centre of the strategy, both for emergency response and for medium- and long-term transformations. The GPR2C’s organizations are clear on the universality and interdependence of all human rights, for all. The pandemic highlights these issues, showing that it is not possible to separate access to water and sanitation from health, housing, food, education, work… Furthermore, the current situation makes clear that social and economic alternatives to the current models of production can’t be developed without thinking about the impacts on the planet and assuring social, economic and environmental sustainability.

Democratic management of the city that puts inequalities at the center

As previously mentioned, the current crisis highlights the long-standing inequalities around the globe and on different spheres: social, economic, territorial and beyond. The immediate effects of the crisis have made evident the essential role that vulnerable collectives play in our societies, such as informal workers who are key in securing essential services (from waste collection to food distribution) and women, who are over-represented in the healthcare sector and lead the way in the care of families and communities. The responses to address the crisis and to set medium- and long-term alternatives must put the protection of these collectives first and address long-standing inequalities. In order to advance in that direction, it is essential to consolidate the democratic management of the city and political participation, both in the immediate response to the crisis and in the development of medium- and long-term alternatives.

This emergency brings forward the protection of life and the need to prioritize it above everything else. Many national and local governments are taking steps in this direction, but this may be circumstantial and only scratching the surface, to finally return to business as usual. The response to the 2008 economic crisis, which decided to rescue banks and speculators over people, cannot be repeated! Following a resilience logic may mean going back to the previous system, which was terribly unjust, patriarchal and mercantile. The logic we need seems to be one of ‘re-existence’, allowing us to reinvent ourselves as people and societies, promoting profound changes we need for taking care of life and of the planet. It is clear that neither governments, nor multilateral agencies, nor even transnational corporate interests, will do this by their own initiative. That is why we need to mobilize even more and in a more coordinated way.

What else can we do better and together to advance in these changes towards an ethics of care? Here is a first list of possible joint actions that were mentioned during the assemblies and can be carried out in the near future:

Check back on our usual communication channels and on our dedicated page for more information on upcoming actions of the GPR2C to tackle the COVID-19 crisis and its impacts beyond. If you have further suggestions of possible actions, don’t hesitate to write us at contact@right2city.org

Full minutes of the GPR2C Assemblies: Right to the City facing COVID-19: