A critical look inside COP25 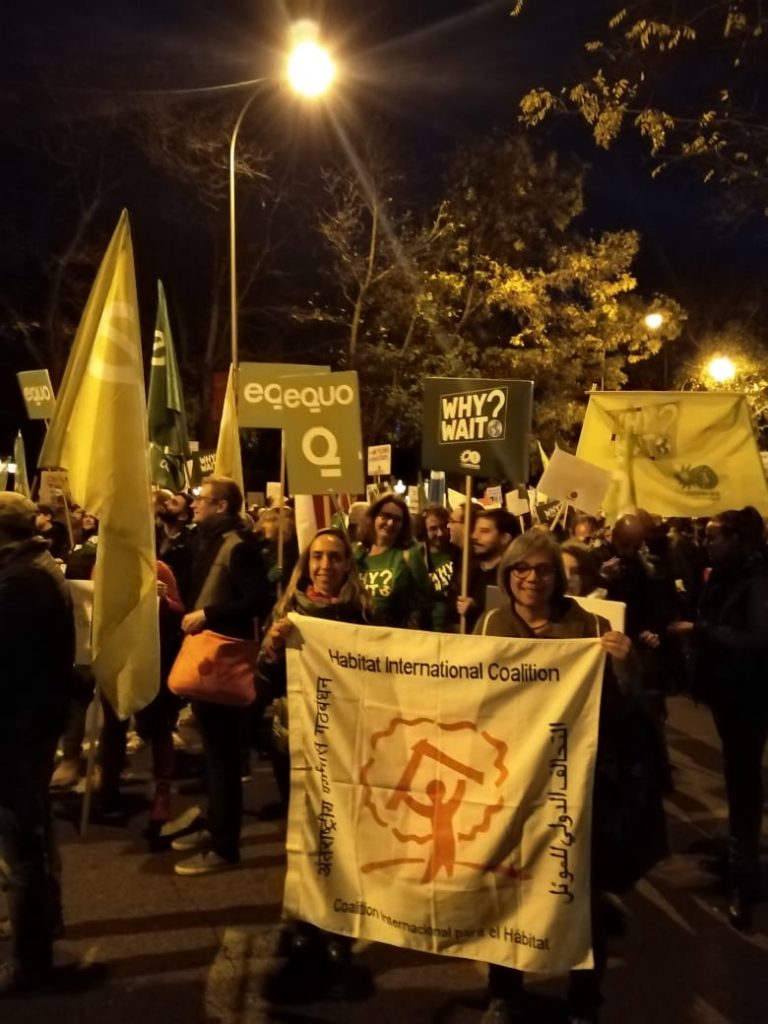 Account by Alvaro Puertas, Secretary General of Habitat International Coalition (HIC) who represented HIC and the GPR2C at the conference

The United Nations walled conferences are too similar to each other and increasingly resemble the tourism congress fairs and exhibitions that are so prominent on the planet and compete to attract participants and visitors. The COP 25 is not an exception, but rather the confirmation of the drift of these spaces. After a few days of participants wandering aimlessly, by the third day the crowd knew which events to attend and among the multitude of bodies it was increasingly difficult to glimpse traditional dresses amidst waves of jacket suits, ties and heels. In an atmosphere that did not reflect the urgency of the topic to be dealt with, only in certain events did the panellists really warn of the enormous challenge that we already have over our heads.

It would be desirable for countries to solve the urgency of their responsibilities with the climate and with people in the same manner that Spain has rapidly tackled the organization of the event, with extraordinary laws and budgets. The pity is that this only happened around the conference because the states fight against climate change little by little; the states have much to say and much to talk about whereas they change very little the logic of massive consumption and production in which humanity has embarked and to which they seem to find no alternative.

The framework is absurd, with the invasion of cartels of companies that bottle water and carbonated drinks at the entrance of the event and with an invasion of the covers of the national press by the most polluting companies in the country on the first day of the event. All of them lend themselves to the game; emitting CO2 gives many dividends that can be spent on green washing campaigns. And as a good UN event, the conference is shielded with three security forces, national police, private security and United Nations security service, each more hieratic.

The carpeted pavilions and customary stands allow participants who have travelled thousands of kilometres by plane to see beautiful images from distant countries and fill their stomachs with industrial minced meat served in disposable and non-reusable containers. Sustainability and respect for the environment in its purest form.

To find a certain amount of energy and enthusiasm or voices that call for fundamental and urgent changes, you have to look through the events and presentations. Even the most ominous scientists speak of their predictions with unusual tranquillity. On the contrary, the representatives of the affected communities, if they raise their voices, are not responsible and are the most punished. They want recognition and compensation, they want the chance to survive the change that is already happening. Pacific small island state communities can wait no longer. It is too late for them.

The strategy of the United Nations and states to multiply parallel events and stands and divide civil society proves successful. It is easier to deal with a thousand organizations than with a single powerful voice that confronts them. Within the conference there can be 100 murmurs repeating the same message every 90′. It would be better to have a scream that would last less and resonate for years in every office.

And the most curious thing is that nobody talks about why we are in Madrid, about the skillful play of a privatizing, extractive and polluting government that abandons its commitments and its population, escaping from dialogue and turning its back on the conflict that broke out at home. It is better to transport the walled city to another country than to be besieged in Santiago. Less noise, less trouble.

And nobody talks about the alternative summits of Santiago and Madrid, nobody talks about the unsustainable urban models of both cities. Why, if they are talking about more important and fundamental things? Only a few events deal with the human rights obligations of states and corporations, despite being a United Nations conference. So many urgent and thorny issues must be dealt with behind closed doors, in a dialogue of the deaf in which the powerful are still thinking how to continue doing the same thing in another way. How to change the future without changing your bottom line.

IFEMA is a fortress, surrounded by security forces and a strategic urban vacuum that separates it from the rest of the world. In a few days all the participants will be at home, and at least they will try to mitigate the emissions produced by travelling to talk about emissions.

And in Madrid everything will be dismantled, something will be recycled and everything will have to be printed again to talk about globalised tourism, personalised useless gifts and other activities where reaching consensus and signing contracts is much simpler than at the COP.