TECHO and the GPR2C promote the Artistic Challenge: Right to the City by Youth 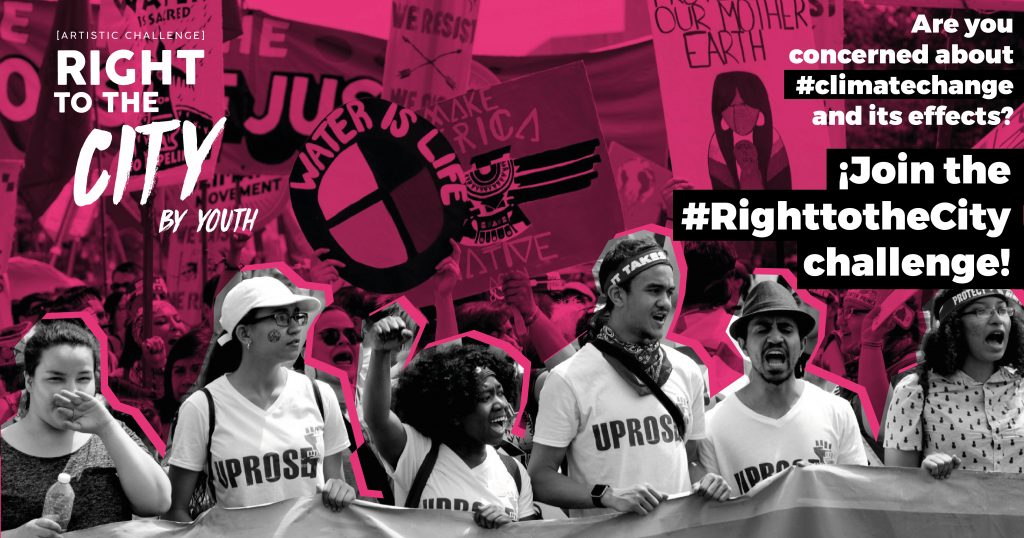 On August 12, 2019, the Global Platform for the Right to the City (GPR2C) and TECHO launched the “Artistic Challenge: Latin American and Caribbean Youth Perspectives on Climate Change under the framework of the Right to the City”. The initiative invites young Latin Americans and Caribbeans between the ages of 16 and 30 to present artistic works that incorporate the relationship between the Right to the City and the fight against climate change. The challenge is part of an online communication campaign that unites the three main components of the challenge (youth, climate change and the right to the city) and was launched on World Youth Day with the continued dissemination of works throughout COP25 in December.

The initiative is framed within the priorities identified in the 2018-2021 action plan for the GPR2C communication working group:

The challenge is a first step in a longer process of bringing the GPR2C to the youth, historically a key group leading mobilizations for the defence of rights, as can be seen in the global movement for climate action in recent years,the feminist struggle, and more. It is impossible to imagine and build fair, inclusive, democratic and sustainable cities and human settlements without having the voice of youth in the center. For this reason, the GPR2C seeks to get closer to the struggles of young people and vice versa, to bring the movement of the right to the city closer to young people. In this sense, the Artistic Challenge emerges as a first opportunity to strengthen this process, while maintaining the strategy of developing thematic communication campaigns in conjunction with GPR2C members. In this case, the initiative has been developed together with TECHO, an organization with a long history of youth mobilization in Latin America and the Caribbean. It  has been decided to focus initially on this region, with the experience (or a similar format)  to be  replicated in other regions. The idea behind the challenge was that, by combining art with the climate issue (a theme that in recent months has taken center stage in youth mobilizations), the doors would be opening for a diverse range of participants, able to provide different views on the meaning and importance of the Right to the City.

Twenty-three works from seven countries in the region (Bolivia, Brazil, Colombia, El Salvador, Mexico, Paraguay and Venezuela) have been presented in various formats: photography, video, podcast, painting, murals, poems, urban artistic interventions and dance. A jury composed of members of the Latin American working group of the GPR2C and two representatives of the organizers of the challenge have selected the three finalists of the Challenge who, originally, should travel to the COP25 in Santiago de Chile where they would participate in the activities organized by the GPR2C in the framework of the summit. Considering the transfer of the event to Madrid, it has been decided that the finalists will travel to another event in Latin America related to the themes of the contest in 2020.

Overall, the works presented suggest youth interest in the Right to the City, as well as a first approximation to the complexities of urban challenges and the potential of the city as a place of mobilization and political expression. However, it is also evident that it is necessary to advance in the dissemination and understanding of the potentials of the Right to the City and its components, mainly in its capacity to provide alternatives and responses to some of the main challenges of today, such as climate change.

The Artistic Challenge has opened opportunities to continue developing collaboration with the young people who have participated in the challenge, as well as to replicate the initiative in other regions and with other themes. Some of the ideas that have been raised to give continuity to the GPR2C work with youth have been: to develop thematic webinars on components of the right to the city, to hold a communication workshop aimed at youth, to create a youth working group within the GPR2C, and more. In 2020 we hope to bring more news about this process. If you have comments, ideas or suggestions, they are always very welcome!