Home / News / News / News / Cycle of debates “Advances in the right to the city in Latin America: Debating the Statute of the City, the New Urban Agenda, new constitutional provisions, laws and public policies”

Cycle of debates “Advances in the right to the city in Latin America: Debating the Statute of the City, the New Urban Agenda, new constitutional provisions, laws and public policies”

In the last three decades, Latin America has played a key role in the debate and struggle for the Right to the City, being the region also a pioneer in experiences of legal recognition of this right and the formulation of public policies aimed at the implementation of its components. 2021 marks the 5th anniversary of the New Urban Agenda (NUA) and the 20th anniversary of Brazil’s City Statute, two fundamental instruments to strengthen the realization of the Right to the City in the region and beyond — both products of important mobilization processes and advocacy strategies among multiple actors.

Under this framework, Cities Alliance, the Latin America Office of Habitat International Coalition (HIC-AL) and the Global Platform for the Right to the City (GPR2C) have promoted the organization of the cycle of debates “Advances of the Right to the City in Latin America: Debating the Statute of the City, the New Urban Agenda, new constitutional provisions and laws and public policies”. Divided into four sessions between October and December 2021, the cycle aimed to discuss the agenda of the Right to the City in Latin America based on the impacts and advances derived from these and other instruments and legal frameworks, aiming to reflect and exchange with different strategic actors in the promotion of better cities for all.

The four sessions of the cycle featured a diversity of views and voices in terms of actors, territories and scales, focusing on four main themes:

The following is a summary of some of the main elements of the debate throughout the cycle. To learn more about the events, the program of sessions and speakers, click here.

Pillars of the link between the right to the city and the Housing Policy being implemented by the Mexican State – Edna Vega Rangel, Director of Mexico’s National Housing Commission

Throughout the four sessions, it was sought to develop an assessment and analysis of different experiences from a comparative and solidarity perspective, in order to identify progress and setbacks, and contribute to mutual learning and the strengthening of a regional articulation around the Right to the City.

On the one hand, although significant progress has been made in terms of both regulations and public policies, the applicability of these norms and commitments specially in informal settlements,continues to be a challenge for the region. Significant setbacks have been recorded in terms of reforms that blur or render ineffective progressive legal provisions (as observed in Brazil, for example), as well as the lack of continuity and articulation in the implementation of policies, mainly in the face of recent changes in the political landscape of the region. At the same time, an increase in centralism in the management and formulation of urban policies is noted, as well as the growing financialization of land and housing. 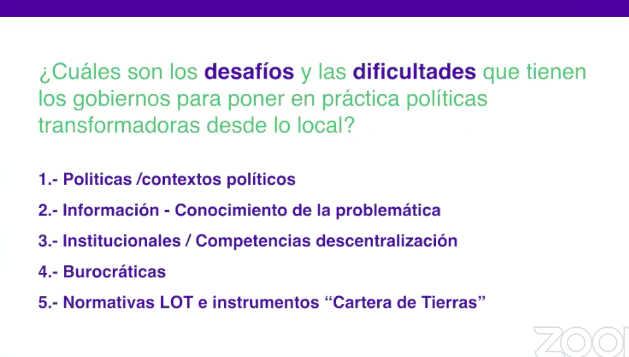 Given this scenario, the importance of advancing in the legal provision of the Right to the City is clear, contributing to a concrete and normative definition that not only supports the development of public policies, but also allows for the protection of such right and its components in the face of conflictive situations – for example, through strategic litigation, mainly in the face of unfavorable contexts/setbacks in terms of government and public policies.

On the other hand, the central role of social mobilization and articulation of diverse actors to advance in the implementation of proposals and consensus around the Right to the City and its components has also been highlighted. The importance of the role that local governments play in the development of policies in defense of the Right to the City in the region was also noted, with the municipal level gaining more leadership in the formulation and execution of urban policies as a result of the decentralization process observed in various countries in the region from the 1980s-1990s.

The Right to the City and its components translated into legislation and public policies:

Some of the elements of the Right to the City that have been highlighted as fundamental in the region’s experience are: 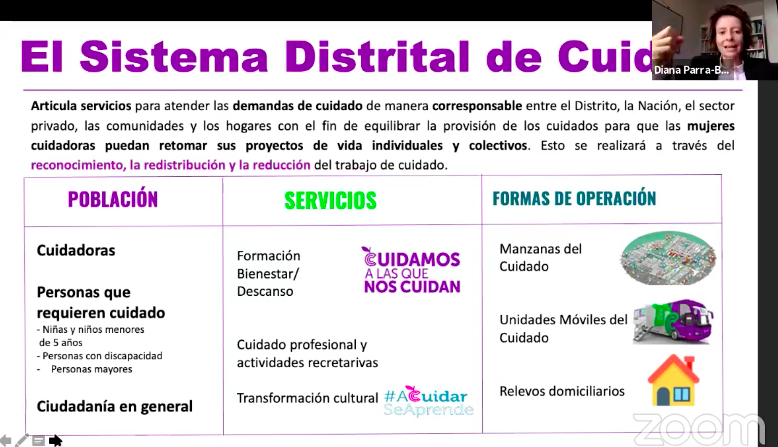 The debates developed throughout the cycle demonstrate that, despite setbacks, through solidarity, strengthening of alliances and collective thinking, the foundations are in place to advance towards substantive transformations that place several of the key principles of the right to the city at the center of the political agenda. Such a process, far from being a linear continuum, demonstrates the importance of experimentation, mutual learning and incremental advances in the implementation of policies and instruments, as well as the importance of permanent mobilization by civil society movements and entities in their proactive role and through active resistance to exclusionary and authoritarian city models and policies.